Posted on September 9, 2012 by westlakemusings

We went back to the Picton Fair.  It was so enjoyable on Friday night that we decided to return to cheer on Jordan Courtney, who was entered in the demolition derby.  The weather was fabulous; fresh and cool after the hard rain and gusty winds of Saturday.  It was the kind of day that gives you energy and puts a smile on your face.

We got off to a wonderful start, being entertained by the 4H club playing  musical chairs with their young goats and lambs.  In stead of using chairs this game involved rubber tires laid out in a circle.   When the music stopped each 4H member and their animal scrambled to a tire.  Like musical chairs the last one standing without their foot in a tire was out of the game.   It was hilarious to watch.  These cute baby lambs and goats were not always cooperative and no amount of pulling or coaching on their leads would get them moving quickly.

Going to a fair necessitates eating lots of junk food.  Today we scoffed down a couple of corn dogs with chocolate mint fudge for desert.

Corndogs. Watch out for those wasps!

OK,  time now for the big show: the demolition derby.  The grandstand filled to capacity.  Obviously this is a crowd pleaser.

Waiting for the show to begin

Demolition cars have lots of safety requirements. All glass must be removed and the doors welded shut.  The gas tanks must also be removed.  On hand in case of a trouble was the Fire Department and Emergency Medical Services. 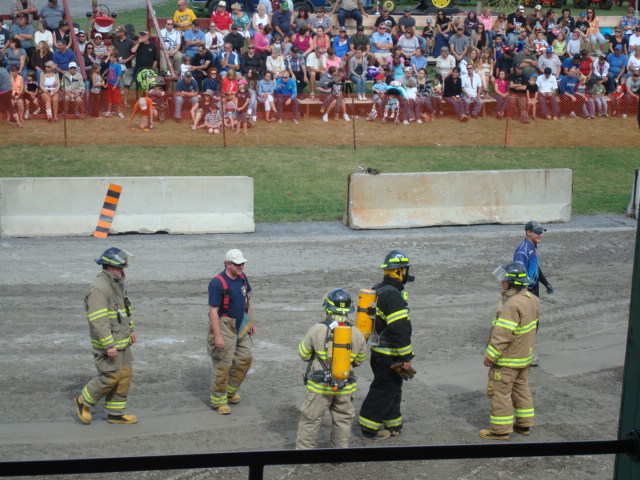 Here is the car we are cheering for:  Number 1625, driven by Jordan Courtney.  Jordan is a local boy who has been helping Warren with his renovation projects.  This kid is a wild story-teller, who would never-say-never to a challenge.   He is extremely personable with charm to spare. ……………………… “Go Jordan Go” .  (But please be safe, says the mother in me) 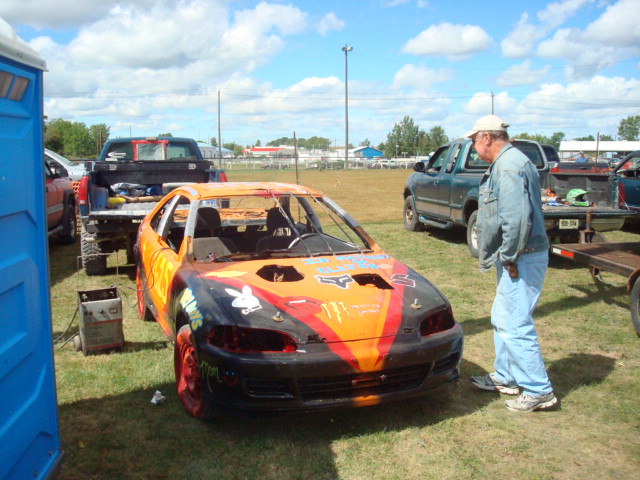 Wow.. I had never watched anything like this before.   It was both thrilling and heart stopping. Thankfully no one got hurt and I did not witness any unsportsmanlike behavior.  It was all in the name of fun.

One popular driving strategy was to back into your opponent at as high a speed as you can muster. Hit from the rear and save your front end as long as possible. Also effective was the group gang up, hitting one car on all sides at once.  A few cars were flipped.   At times two cars would ram together and get stuck like mating insects.  Rear axles were twisted and wheels sprained at odd angles.  The cars with front wheel drive were able to live a few moments longer and drag their broken rear ends back into the action.  There was lots of smoke and steaming engines, grinding gears and the continuous spinning wheels.  Some favourites were like zombies refusing to die.   It was any mother’s nightmare, but you couldn’t take your eyes away.

Jordan entered into two heats but the car was never really up for the second fight.  It was over quickly.  A brave and valiant effort but car # 1625 had to be carried off the field in the end.

That’s it.  The fair shut down shortly after the final demolition match.   The fair is over until next year.  What an  awesome afternoon.

In 2013 my husband and I retired. We bought an old pre-confederation house out in the country. This blog is about our new world in the country as we explore all of life's possibilities.
View all posts by westlakemusings →
This entry was posted in Life in the country and tagged 4 H Club, demolition derby, goats, grandstand, Jordan Courtney, lambs, Picton Fair, Prince Edward County. Bookmark the permalink.