Posted on August 7, 2012 by westlakemusings

In the 60’s, I grew up in a household which thought Chef Boyardee was exotic.  I didn’t taste my first pizza until I was in high school and  I can track my first encounter with antipasta.  I was 33 years old and eating for the first time at Granos Restaurant in Toronto.   On display at their counter were beautiful jars filled with olive oil and vegetables:  bright peppers, tomatoes and herbs.   They were like rich  jewels.   A symbol of  another world, someone else’s life.    Until now…..  oh ya.

This morning all of that changed.  I am now the exotic exciting one.

It all started with a blog from Heidi.   http://lightlycrunchy.wordpress.com       Today she was writing about what to do with an over abundance of cherry tomatoes.  Her solution was to dry them in the oven.  Inspired, I tried it.

For the most part I followed her advice.  I started with a baking pan covered in parchment paper.   I cut my cherry tomatoes in half, lengthwise.   Added salt, pepper, fresh chopped basil and a branch or two of fresh french tarragon.

(This is where I veered off)  I added slices of garlic and drizzled olive oil and some balsamic vinegar lightly over the tray.  They were baking in a low oven set at 150 degrees for six hours.   NOTE – even if this recipe does not appeal to you,  you must try it because your house will smell simply wonderful when it is cooking.

Six hours later…. they had dried up into candy.   Tiny, chewy, warm and packed with intense flavour.  Zowy.  I forced myself to stop  popping them back into my mouth – Must – save – some….    ummmm.

But I’m not finished yet.

Off I went to my Home Hardware store and I bought more canning supplies:  wide mason jars, lids, a cool magnetic wan for pulling the lids out of boiling water and a lifter.

After sterilizing a jar, I filled it with the garlic, herb/tomato mixture and then filled the jar to the brim with more olive oil.    Company is coming for the weekend, so this will be a very tasty addition to my sandwiches.   Damn.  I’m good.

This was definitely not something I learned from my mother.  Isn’t it beautiful?

Oh, by the way.  Warren has his own little science experiment on the go.  He is pickling corn.

Aren’t we a creative pair? 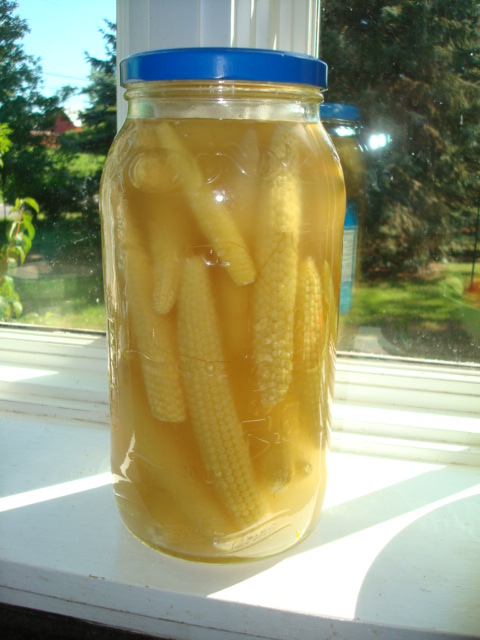 In 2013 my husband and I retired. We bought an old pre-confederation house out in the country. This blog is about our new world in the country as we explore all of life's possibilities.
View all posts by westlakemusings →
This entry was posted in Life in the country and tagged basil, olive oil, oven dried tomatoes, Prince Edward County, tarragon, West Lake. Bookmark the permalink.